a lightweight, fully stabilized cable camera system for the most demanding situations

Dependability and versatility are two of the factors that make this cable system the optimal choice for many applications. Whether it’s silent moves in sensitive interiors, or lightning fast tracks in brisk weather, Colibri WireCam will always please with stunning, rock-steady footage.

As of 2017, the Colibri Wirecam is available packaged with the brand new 5-axis gyro-stabilized Cineflex platform (the former GSS B512), the world’s first 12 inch gimbal. 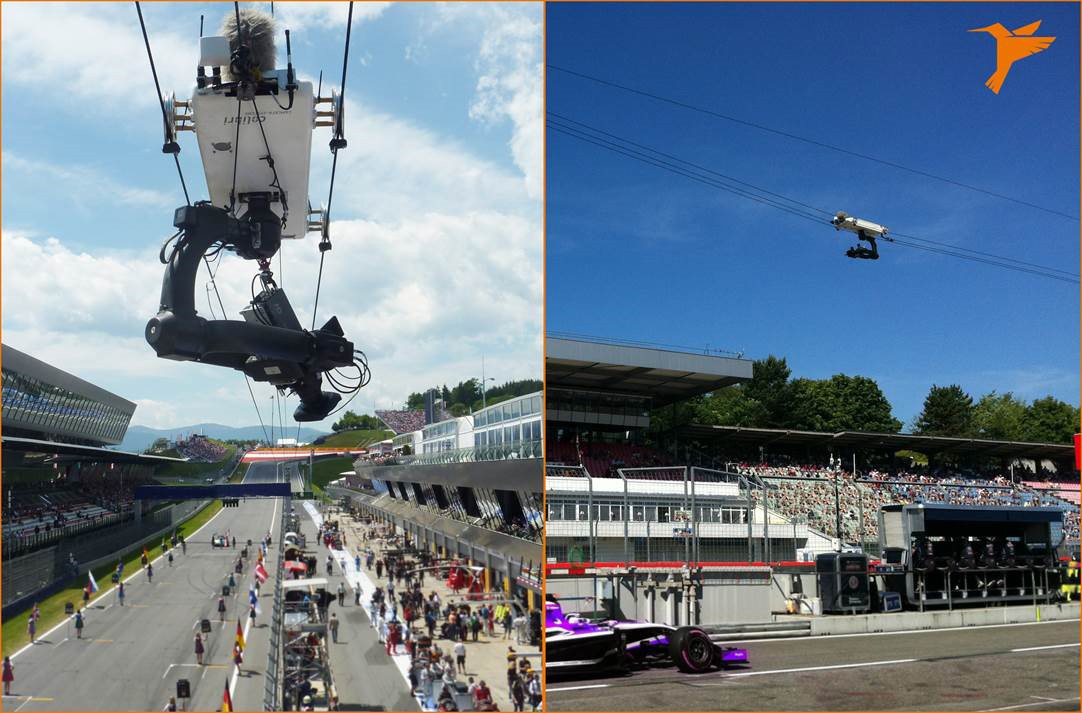 Around the World with the King of Motor Sports

Our fast-paced imagery of the 2014 Spielberg circuit was such a huge success among audience and organizers alike, the Colibri took to the air again that same season to fly over the races at Silverstone, Hockenheim, Budapest, Spa, Monza, Singapur, Suzuka, Sochi, Austin and Abu Dhabi.

Every year, the Colibri system is an integral part of every race broadcast worldwide in this class, delivering stunning imagery and dynamic moves as we follow the drivers into the pit and present a detailed overview of the starting grid. 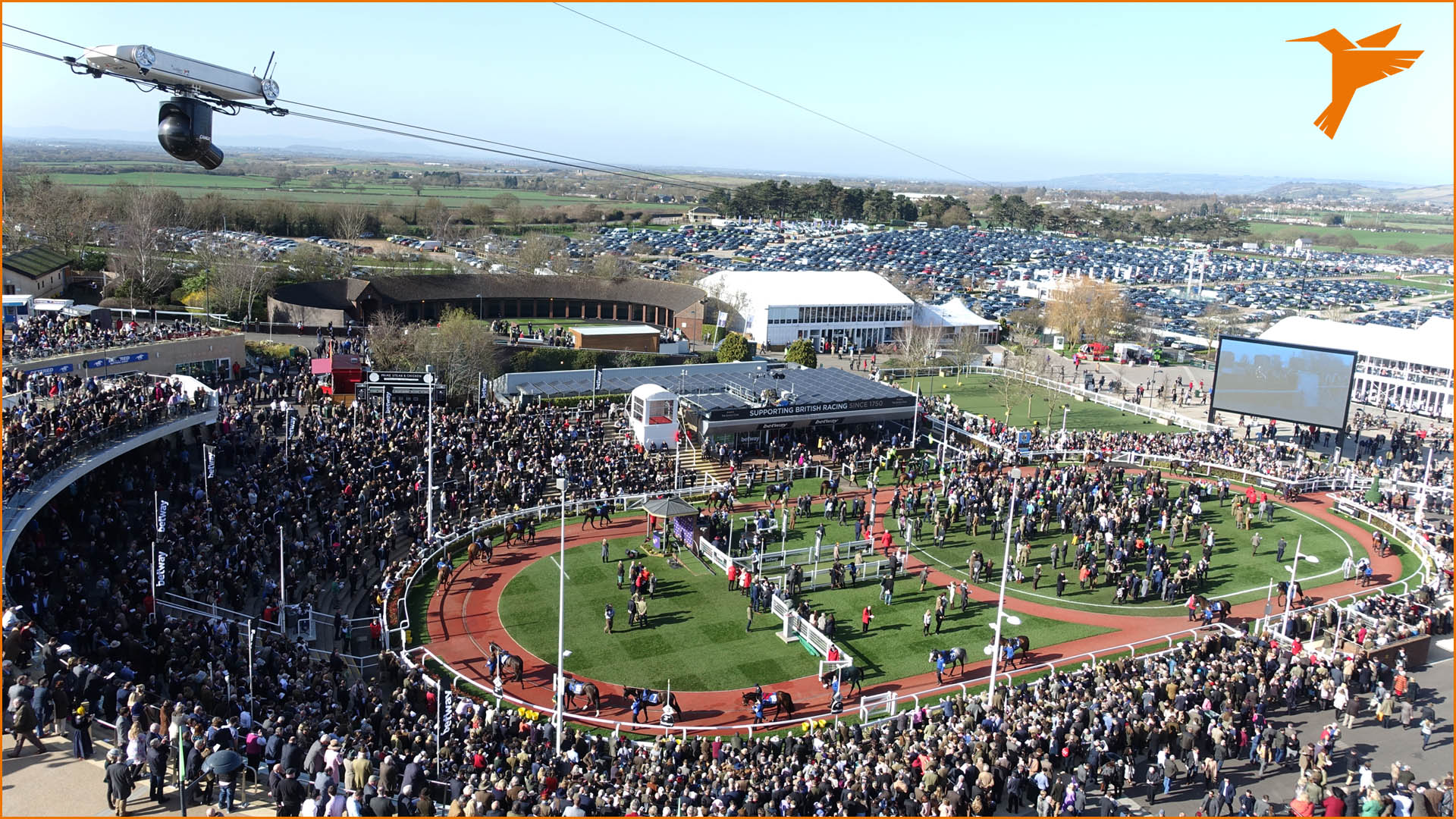 The Colibri System lived up to its name at the 2017 New Year’s Day Race here in Cheltenham. We were excited to be invited back to collaborate once again with ACS on the ITV coverage of the Festival.

Our 300m cable run offered beautiful shots of the newly designed course, and established a visual connection between the parade ring and the main race track. 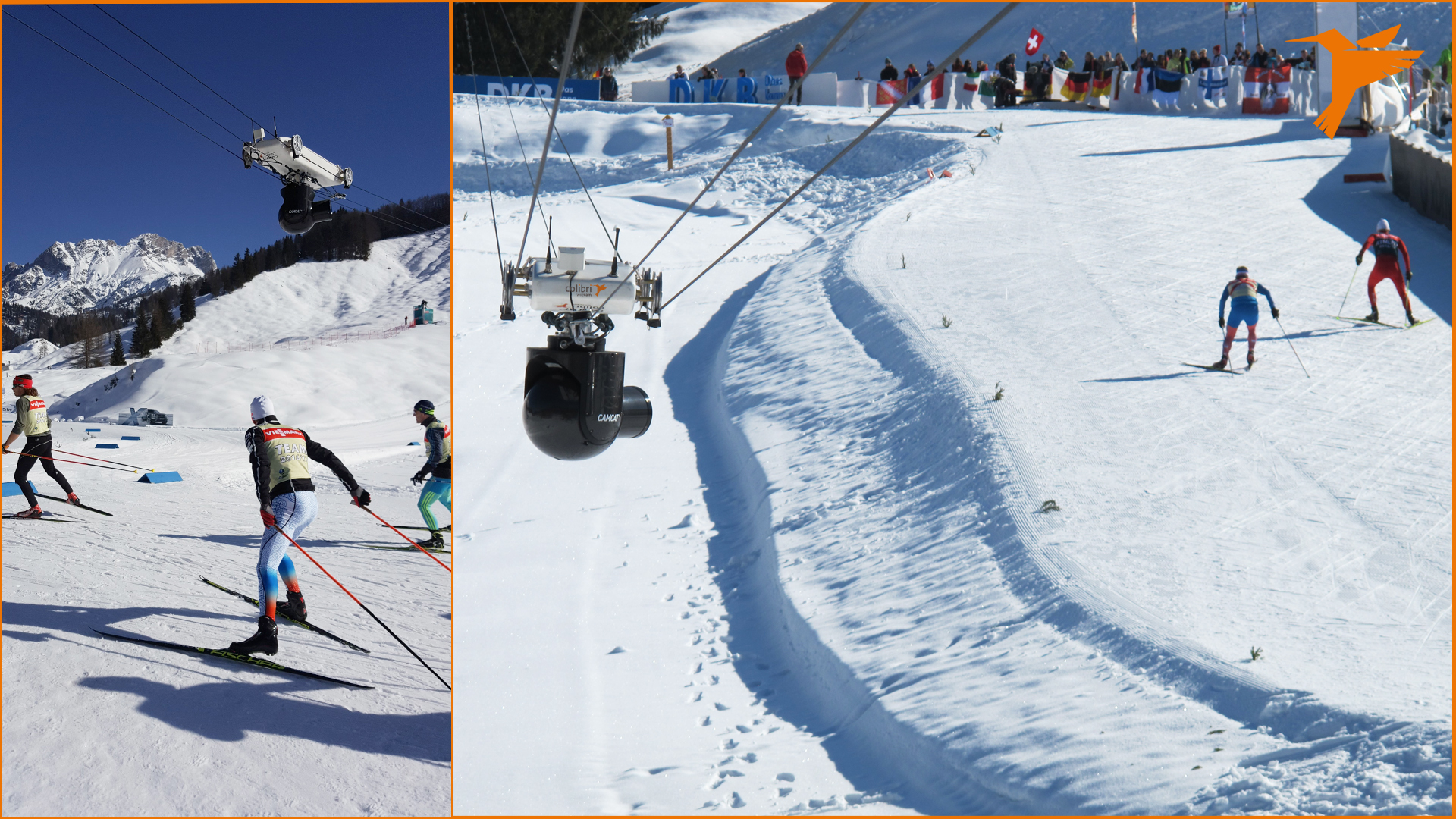 For this production by Austrian Broadcasting, we devised a short and relatively low run that impressed viewers and crew alike.

Working under the direction of Michael Kögler, the unique moves this setup offered were so well-received that we were called back a couple of months later to take part in the 2017 World Cup weekend.

We came back again for the World Cup weekend 2018 in winter wonder land weather conditions. 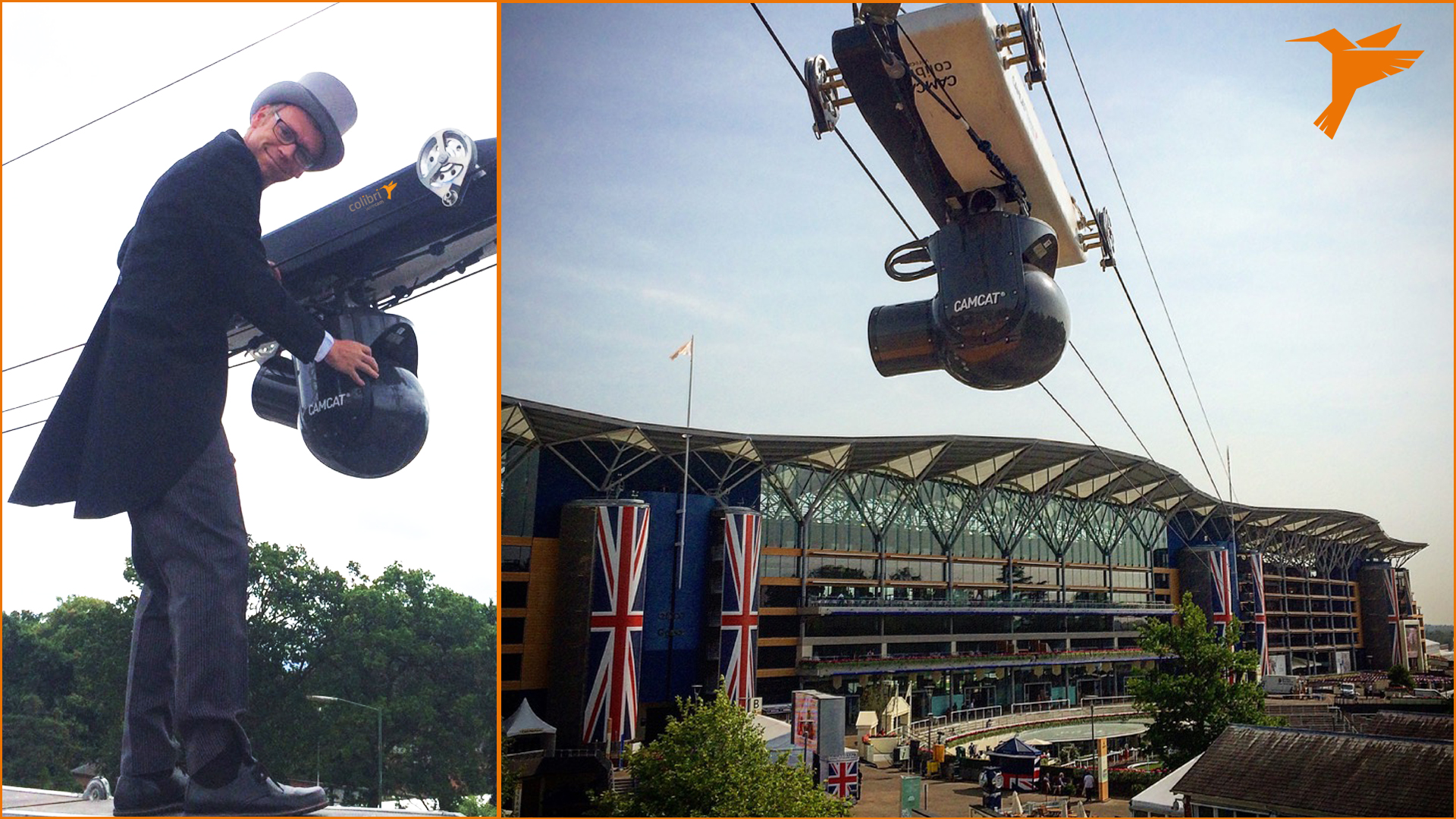 It was a great honor to contribute to the ITV-produced coverage of this time-honored equestrian event. In another collaboration with ACS, we concentrated on the Parade Ring, the center of attraction before and after the event. It is here that the horses are warmed up and the winners are honored.
This was the logical choice after enthusiastic reception of our contribution to coverage of the Cheltenham Festival, where we chose a similar trajectory. We look forward to similar opportunities in the future. 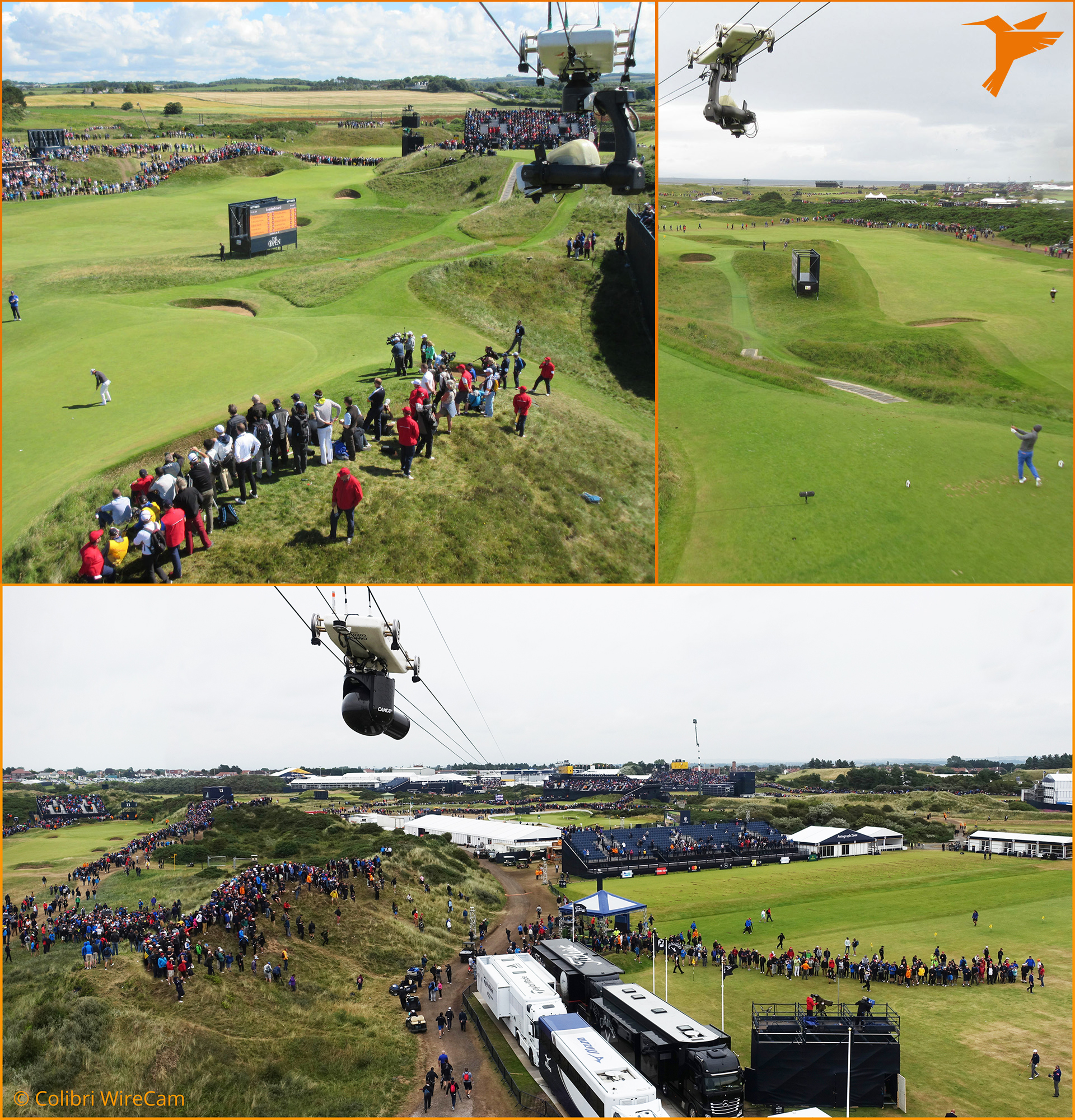 In 2016, the Colibri System took part in its first British Open, collaborating with Aerial Camera Systems and ETP Productions.

We chose a strategic setup along the legendary 8th hole, the “Postage Stamp”, that made it possible to pick up each player at the tee, accompany them along the course and watch crucial decisions being made on the green.

Thanks to the System’s dependability in wind and weather, not to mention breathtaking imagery from a unique perspective, we were immediately booked for the following two years as well.

In 2017, at Royal Birkdale in Southport, we set up a shot that began at the putting green, swooped along the fan zone and up and over the driving range. This run offered a beautiful perspective of the overall course as well as grand views of the 13th, 14th and 15th holes.

We’re looking forward with great anticipation to taking part in the 147th Open at Carnoustie in the Summer of 2018. 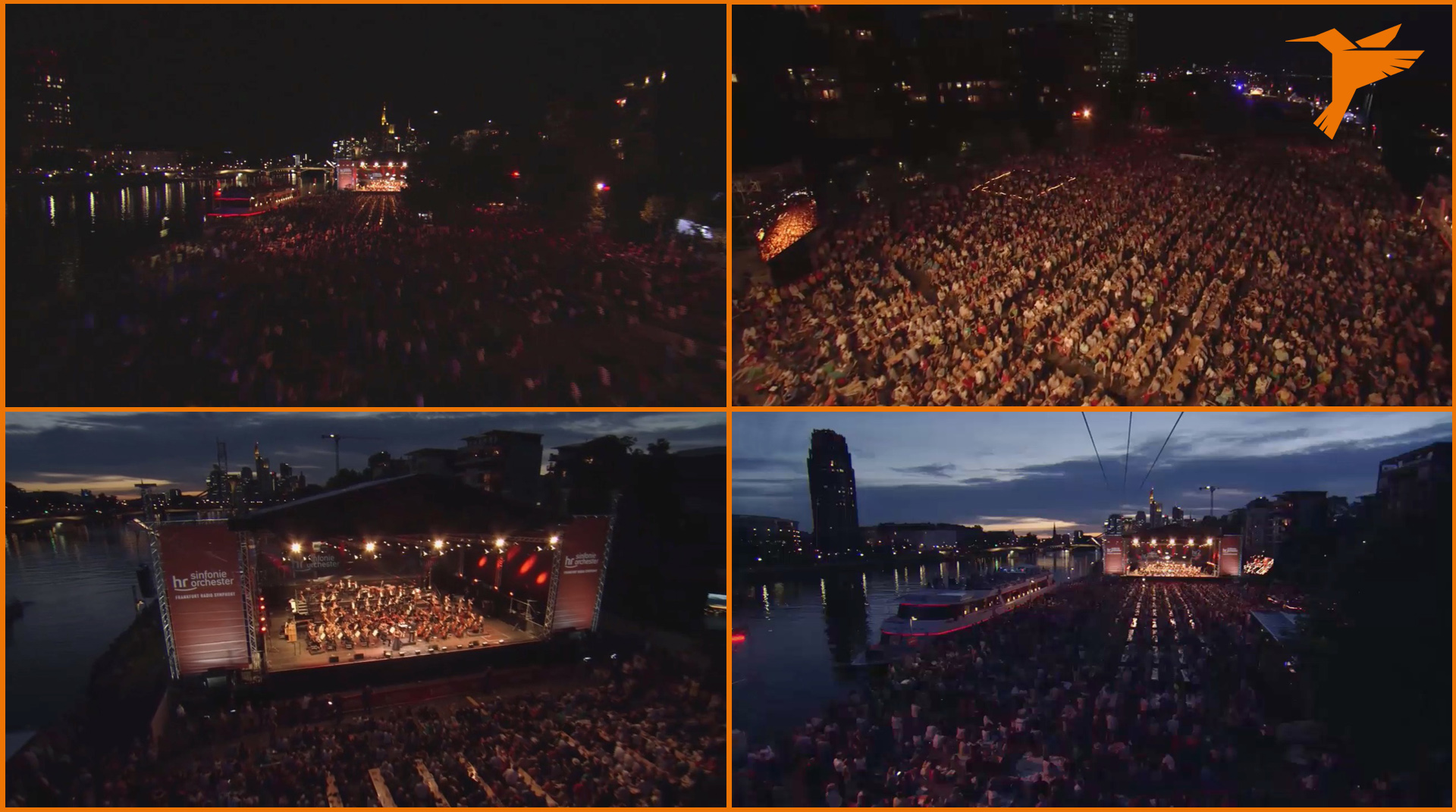 20,000 music lovers flocked to the banks of the River Main every year to attend Hessian Broadcasting’s classical open air event. To convey the ambiance, we decided on long, atmospheric moves that tie together the Frankfurt skyline, the boats on the river, the entranced spectators and the musicians on stage. To accomplish this, we rigged a 300m cable running parallel to the bank, nearly the entire length of the audience area.

The terrain was tricky and posed a challenge for organizers and security personnel as well. Our Colibri WireCam swooped in to lend a hand during preparations, giving the authorities a unique vantage point from which to survey the grounds, playing a key role in ensuring the safety of the audience.

The great concert from last summer is available for viewing online at ARTE :
Europa Open Air 2017 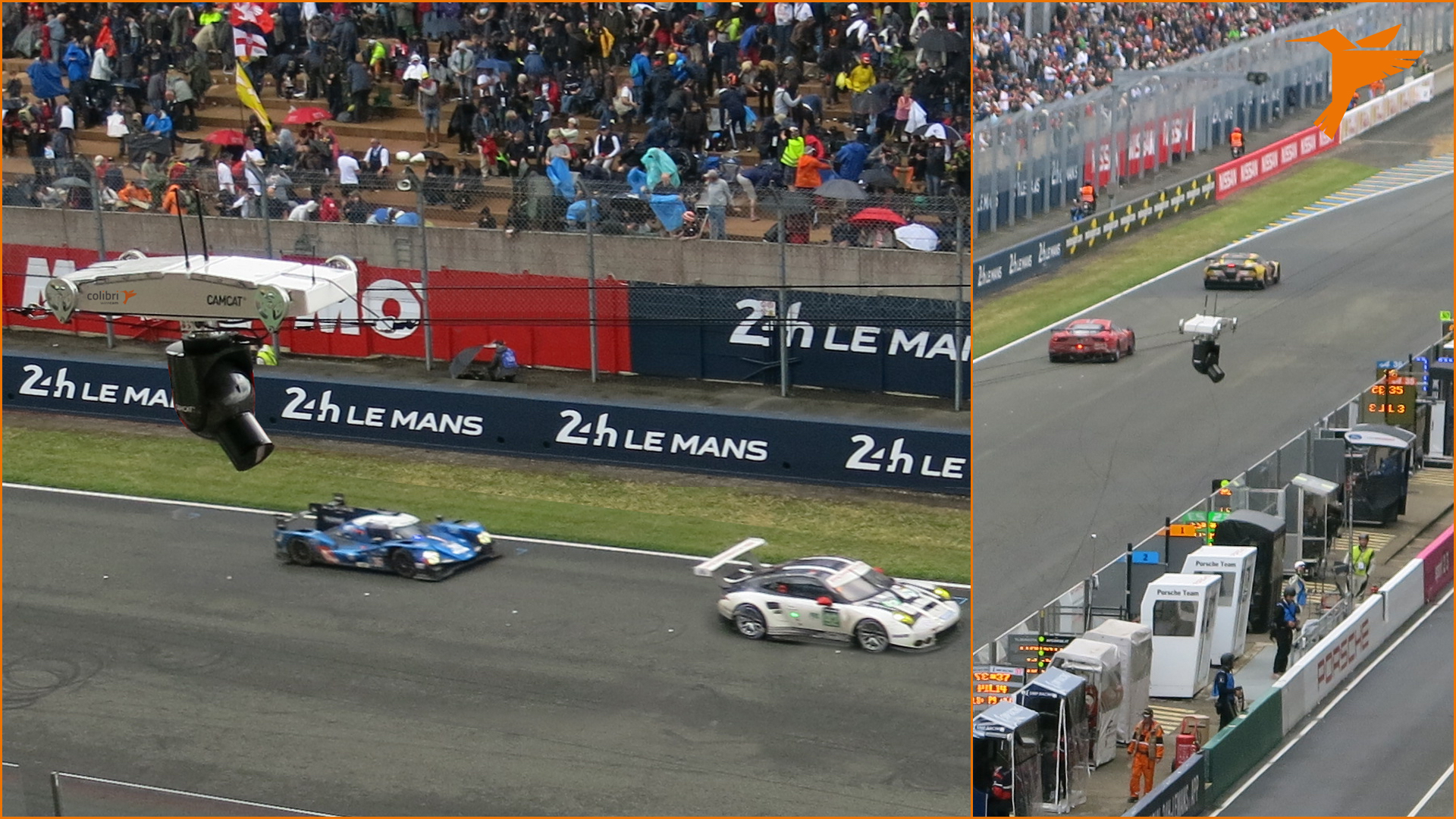 30 consecutive hours live on air – a true challenge not only for the race teams but also for our crews and the Colibri system itself. We were there from the very first up to the very last minute. Traveling along a 300m (1000′) cable span, the Colibri covered a total distance of 350 km (155 mis.). Thanks to the system’s fully stabilized head even the swiftest moves – at over 50kph (30 mph) – delivered incredibly steady, spectacular imagery. Once again, we were able to demonstrate quality, reliability and versatility. The Colibri passed the test with flying colors – as did the crew 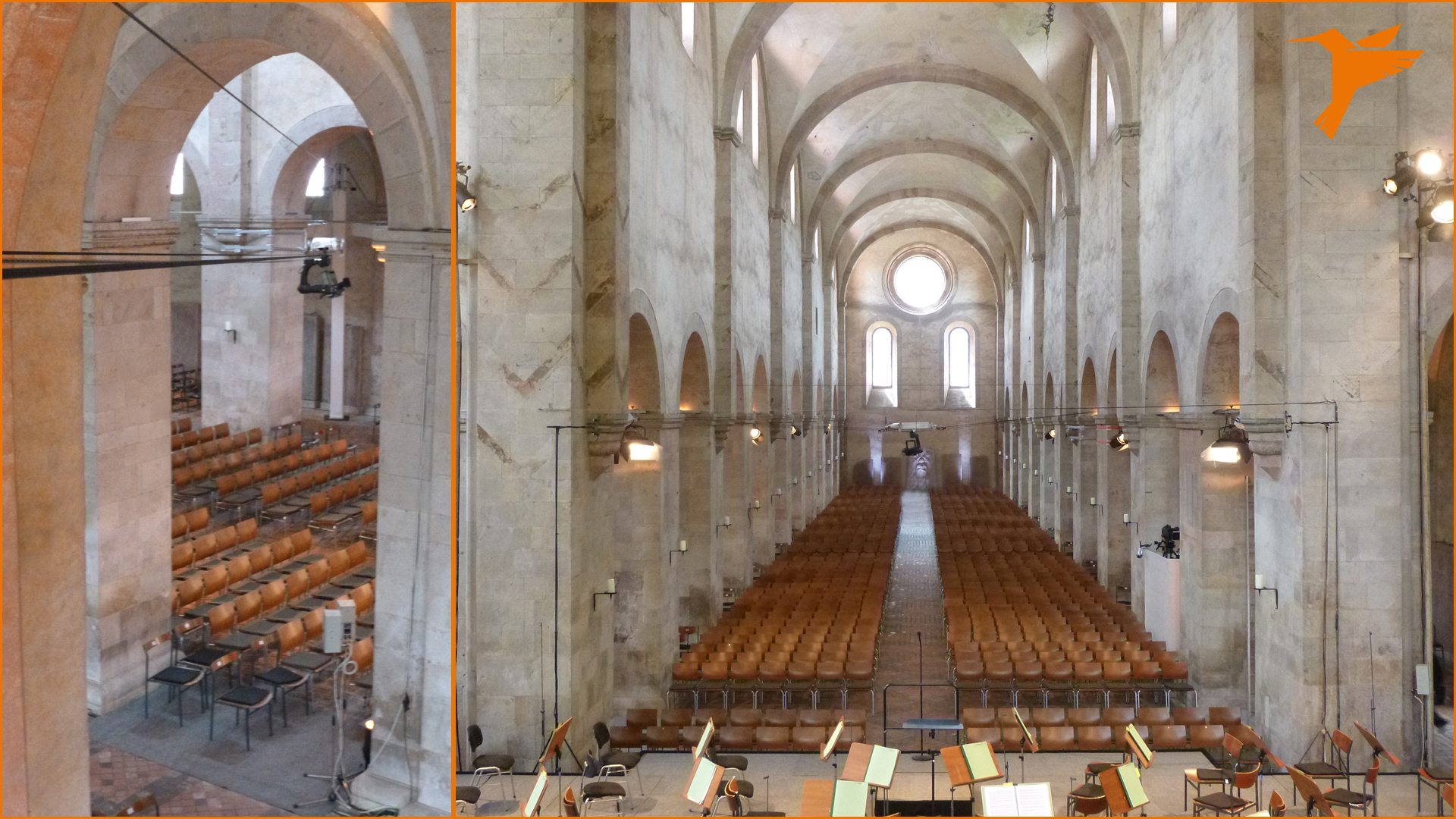 Sensitive locations like this famous 12th century basilica call for the utmost care in planning and implementation.

Putting to use our outstanding experience working in historical structures, we devised a spectacular route through the medieval arcades. The silent move captured the awe-inspiring atmosphere without any obstruction of the audience’s view.

Our Colibri WireCam was an important component in this innovative overall concept – realized in cooperation with Hessian Broadcasting and under the direction of Nele Münchmeyer.

Thanks to the crew’s experience working in sensitive locations and the sensational images the Colibri WireCam is able to capture of the beautiful basilica, we are always welcomed back to the Eberbach Monastery with open arms.

At Nürburgring, we chose a diagonal cable trajectory over the start/finish straight and the pit lane. Planning and implementing the rig was tricky and took a lot of skill and experience. It was tested and certified on location by TUV Rheinland (one of the strictest industrial safety authorities in the world). The extra effort payed off, and we were able to offer directors Sepp Friedl and Michael Kögler exciting new angles on the race course, in addition to our usual sensational shots from the pits. 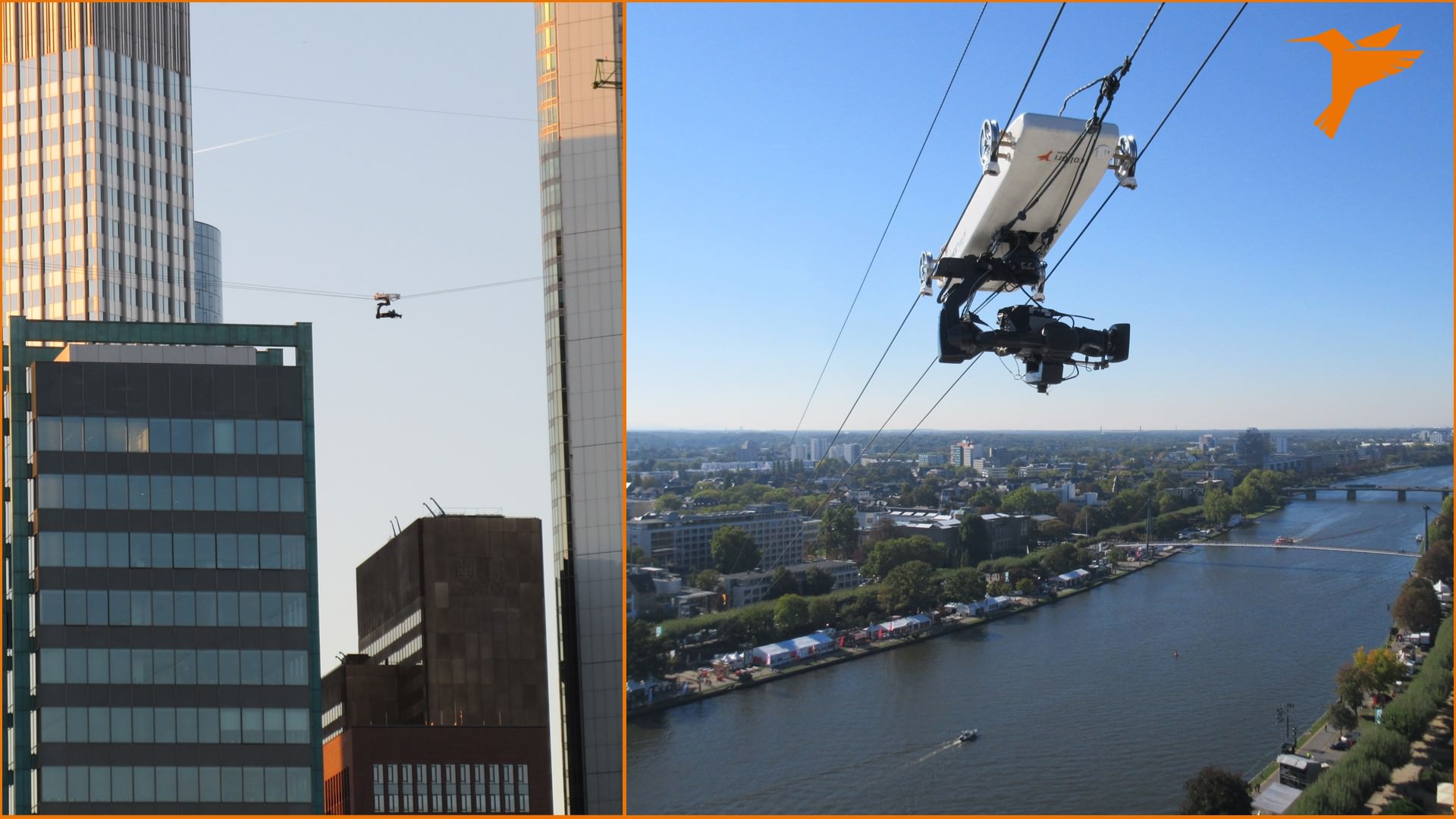 Coverage of the anniversary celebration, a broadcast conceived by Mathias Hundt and directed by Nele Münchmeyer, marks Colibri WireCam’s 3rd cooperation with Hessian Broadcasting this year.

To portray the spectacular event, we decided on a similarly spectacular cable run: a 350m (1150′) diagonal spanning the River Main, with an elevation drop of 70 m (230′). The run gave us an amazing variety of angles to choose from.

During the afternoon, we focused on the Frankfurt skyline and the riverbank, supplying live coverage for a variety of anniversary broadcasts. In the evening, our attention was centered on the grand show along the river and on Untermain Bridge, transporting the unforgettable atmosphere into the living rooms of viewers throughout Germany.

This beautiful project, realized by MMP Mediatec Broadcast GmbH, Opus Stuttgart and the German broadcasting corporation SWR, directed by Michael Maschke, presented a unique opportunity for the Colibri WireCam to demonstrate its extreme versatility. In addition to the usual breathtaking master shots, we were asked to get in close for a number of rock-steady tracking closeups.

Thus we got the chance to not only convey the amazing overall atmosphere but also to capture a variety of intimate moments on stage. Once again an impressive exhibit of the benefits of our system’s fully stabilized setup.

We was very happy to come again 2015 for Zaz and Jakie Cullum.

Special thanks to Roger Hodgson.

…Cooperation was extremely pleasant and unproblematic for me as production manager and organizer of the festival. And as the responsible party in safety concerns I could find no fault. Niki Griedl and his crew provided us with beautiful imagery. The boys and Colibri Wirecam rock!”

“…Colibri Wirecam was the ultimate choice. Quick setup, long rope spans and the perfectly stabilized remote head not only made it possible to do without a camera crane, but opened up totally new angles. In Roger Hodgson’s enthusiastic words: “I’d like to have one of them” – Me too…” 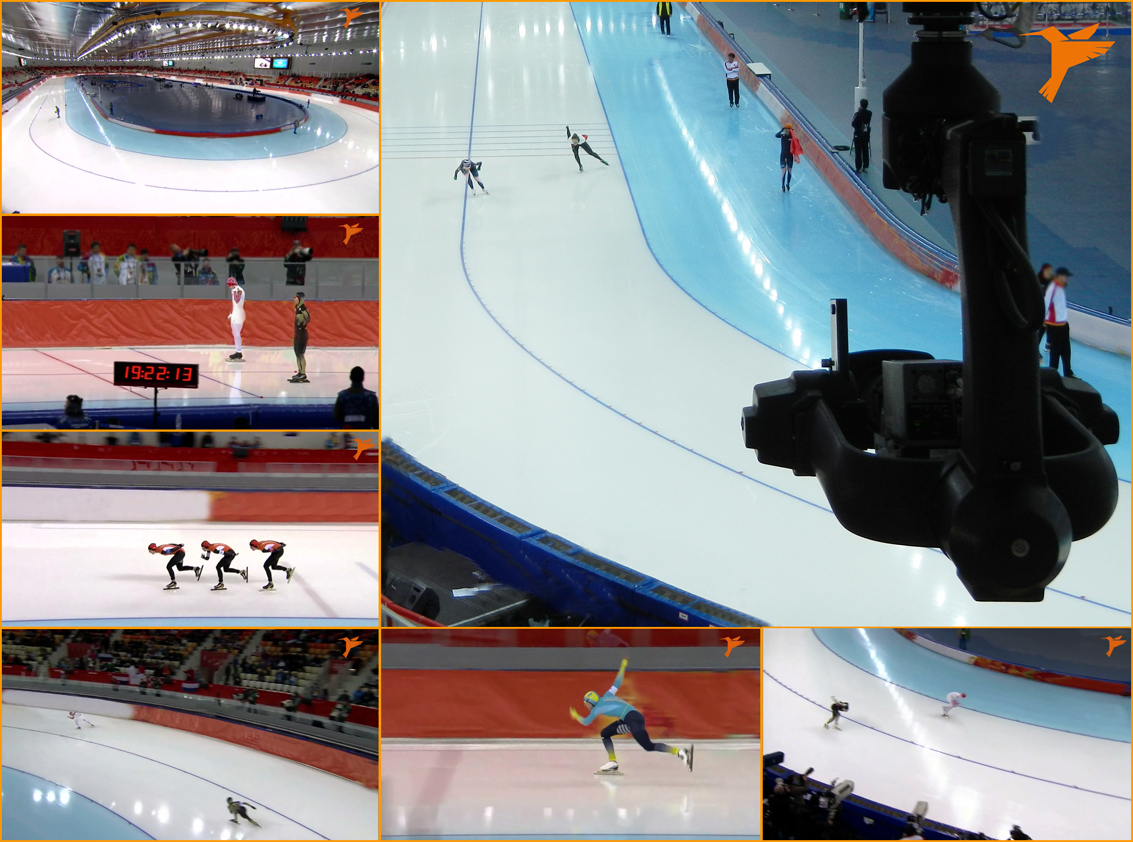 The deciding factors in capturing this event were speed and acceleration. In order to keep pace with the athletes and record breathtaking imagery, we really had to take the system to the limit.

At a mere 200m (656ft) rope length, our Colibri was traveling up to 55km (35miles) per event. This kind of acceleration and max velocities of 15 m/s (50 ft/s) are a challenge for any camera head. Our brand new Flighthead Mini 3 Digital passed its first test with flying colors, delivering swift, steady moves and galvanizing, dynamic imagery.

The Colibri WireCam maintained top performance throughout the whole event without a single technical mishap. This type of dependability is yet another of the features that distinguish our system.

The Colibri system earned its stripes in its first all-live event this May, working for BMS Production Group. Stunning trademark shots added to the amazing visuals impressed participants and onlookers alike. Despite abbreviated time slots for setup and strike, our foremost concern remained minimizing impact on the sensitive landmarked location.

Golden Hall of the Vienna Musikverein

Austrian Broadcasting (ORF) called on us once again this year to enhance their live transmission of the traditional New Year’s Concert at Vienna’s prestigious classical venue. The Colibri WireCam system’s virtually silent operation was a decisive factor for organizers, audience and musicians. The system’s low impact build and modest cable tensions were also crucial in this particulary sensitive location.

NBC turned to the Colibri WireCam system to compliment their coverage of the 2012 Election Night at Rockefeller Plaza. A special setup was needed to make the breathtaking shot down 5th Avenue to Rockefeller Center. The event also gave the lightweight wirecam system an opportunity to demonstrate it’s suitability for exterior shots.

About the Colibri WireCam system 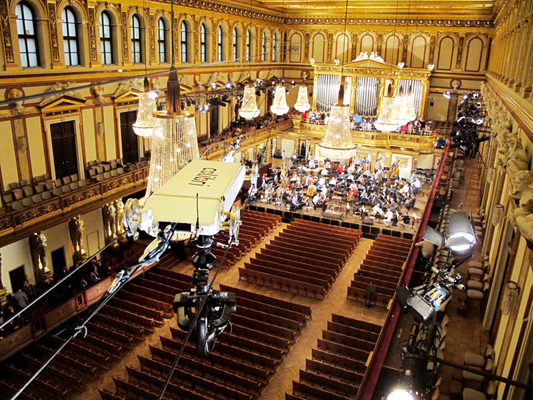 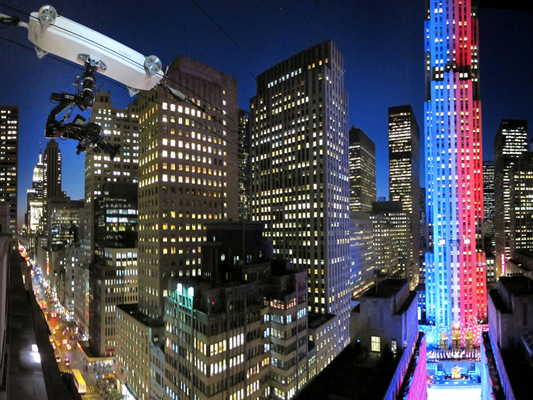 The Colibri WireCam was developed and built by CAMCAT® Systems, an Austrian company with years of experience in cable camera systems. With high standards of safety, quality and customer satisfaction they came up with a lightweight system as compact and as versatile as its avian namesake.

The Colibri System is equipped with a fully stabilized camera head that ensures rock steady shots from the most unusual angles, even at top speed. Thanks to modifications implemented by the manufacturers, the head operates virtually soundlessly, enabling breathtaking shots even in the most sound sensitive applications. The system’s mere 50cm (20”) track width coupled with its lightweight build and resultant low rope force make it especially suitable for interiors.

The Colibri System is just as suitable for outdoor shots: with cable lengths of up to 350m (1,150′) and top speeds of over 50km/h (31 mph) the system is an inexpensive alternative for any number of amazing camera moves. Its versatility and adaptability to a wide variety of cameras make the Colibri the ideal choice for feature film and commercial shoots. 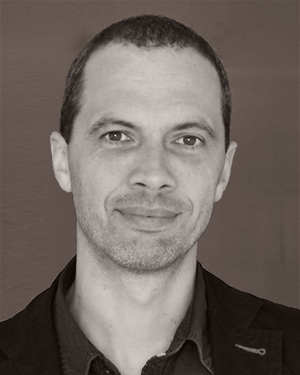 I began my career as freelance cameraman and DP in 2000, following many years as a lighting technician, designer and gaffer. I have since worked on copious TV, film and commercial projects. The past couple of years have seen me producing more and more projects myself, so I am well acquainted with the challenges that arise when creative vision encounters budgetary realities.

2013 I accepted the directorial position (managing director) at Colibri WireCam GmbH with great enthusiasm. I believe that a combination of artistic vision and organisatorial expertise will succeed in making the Colibri a lead competitor in its field.

I am looking forward to working with you to find an optimal solution for your project.